Workshop in the District of Recklinghausen, Germany – June 2016 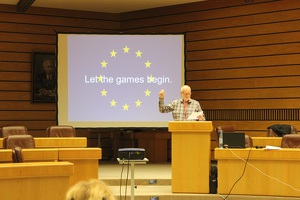 For an introduction on the topic of EU politics, the workshop participants were invited to a podium discussion on their first day. The Head of District, a representative from a district town, a former MEP as well as a representative of the ´Europaunion` addressed the question in what way different political aspects and topics, especially EU politics, have an effect on life, diversity and integration within the living quarter.

On the second day the participants were given the opportunity to directly experience European politics for themselves by slipping into different roles within the EU structures. In collaboration with ´Europe Direct Duisburg`, a simulation game on EU politics – ”Integration through Education” – was played. After a short presentation on the work of the European Union, an EU-wide framework for educational politics and a suggestion for guidelines had to be established within the simulation game.

The participants assumed the roles of members of various European institutions, such as the Parliament, the Commission or the experts. Using the example of education and integration on an EU-wide level, the participants could discover how EU institutions and legislative procedures work and which opportunities there are to participate in the actions of the European Union.